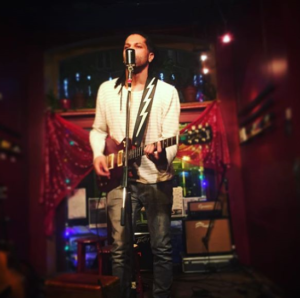 Sule is definitely writing and recording music he wants to hear. “Love Me” is a very effective but decidedly “old fashioned” song, but don’t mistake that for a slight. Instead, this longtime musician, vocalist, and songwriter has parlayed his time working with some of the greatest talents in the music world into an across the board command of technique that allows him to use any vehicle he likes and still keep it sounding fresh, current. The production for this new single is spot on – everything is balanced nicely, cleanly separated, and invested with a warm hue that makes for an inviting listen. Certainly, at the center of it all, is Sule’s voice and his presence inhabits the song without ever commandeering it. “Love Me” may reference Americana influences and do so quite skillfully, but there’s ample groove here and the musicians contributing to the track work together like a longstanding band.

His voice is one of the more outstanding vocal instruments I’ve heard in recent memory. You never “see through” his confidence and the seamless arrangement, incorporating only a few musical elements, nonetheless complements his voice extraordinarily well. He has a real knack for delivering nuanced vocals reflected in the gradual rising and dipping of his voice and the particularly dramatic moments that come when he throws just a little more of himself into the musical fray without overstepping the song’s needs. His phrasing manages to embody both the longing, mild sensuality, and joy of the emotion love without ever reducing it to hackneyed theatrics and his enormous talent for doing so feels almost constrained by the relatively modest nature of the arrangement. He’s capable of anything he wants to do as a vocalist and brings a palpable stature to this beguiling melody that’s impossible to forget.

His voice links up nicely with the pleasing jangle that’s at the heart of the tune. The arrangement definitely elevates the intensity at key points, but the song is coherent in the way that it moves from its more restrained moments into its emotional and sonic peaks. There’s no real heavy percussion presence in the song, but that presence manifests itself in a creative way without ever seeming too obvious and helps the song crescendo and, ultimately, musically climax in a very satisfying way. Sule is particularly effective during the song’s chorus and it makes for one of the more memorable moments in “Love Me”. This is as fine of a single as a new solo performer could hope for and, if Sule’s song seemingly has the freshness and exuberance of a much younger performer, it’s because he approaches it with a surfeit of inspiration that many of his contemporaries and peers quite clearly lack. It makes for the most crucial ingredients in a tasty musical stew assured to get Sule’s 2018 off to a particularly memorable start.