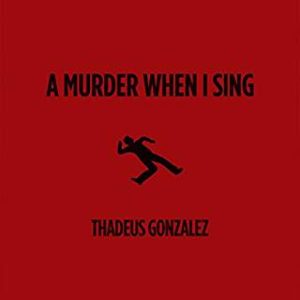 Rock musician Thadeus Gonzalez has earned international critical acclaim, and has been called ”a frontman to watch” with “an arena looking and sounding attitude.” He’s opened for KISS, Motley Crue, Slash and in 2017, Bon Jovi at the SAP Center in San Jose.

The highly anticipated new single “A Murder When I Sing” follows the successful release of the first single “Silver Inside” and it’s music video filmed at Soundwave Studios in Oakland.  The video harnesses the dynamic live performance that has earned Thadeus Gonzalez critical praise. Gonzalez explains that the song is about “being self-aware enough to understand where I am, and where I want to be.” “Silver Inside” was written by Gonzalez and recorded with Richards on bass, Dennis Hill on guitar, and Nathan Walker (Lit) on drums. Hill (Hagar/Satriani, Lit, Good Charlotte) also produced and Kyle Homme (Matt Costa, Sugarcult, Reel Big Fish) mixed.

Pre-order  your copy of “A Murder When I Sing” by Thadeus Gonzalez on iTunes here:

The official website for Thadeus Gonzalez may be found at www.ThadeusGonzalez.com

The official website for The Spectra Music Group may be found at www.spectramusicgroup.com

Outwardly known to the universe as the saxophonist/guitarist for Pink Floyd, Supertramp, and Toto, Scott Page is so much more than a musician and performer. He’s also an entrepreneur and a technical phenomenon, serving as […]

Okay, I’ll just say this: TOM. PROCTOR. IS. EVERYTHING! Literally, he’s everything; him, his band, and his newest album, Working Man, which was released June 15thof this year. As a music fanatic, I’ve never listened […]

Spaceship Days Touches Down With New Album “Into The Blue”

Spaceship Days have just released their Spectra Music Group debut album “Into The Blue.” Available worldwide, download your copy today! Spaceship Days is an Alt-Pop band that took their name from a lyric in a […]