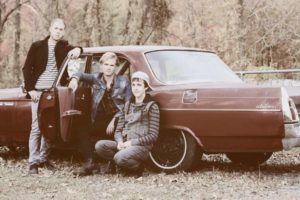 C.K. Flach and his group The Rising Tide are about impossible to avoid these days if you’re a fan of alternative country music, and it’s no wonder why every critic in pop has made at least one mention of their latest single “Friends” since it dropped earlier this month. In a genre like country music that doesn’t have as much variety as some of the other big genres that are popular in music today, alternative groups like C.K. & The Rising Tide stand to benefit the most from tailoring their craft around the more neglected fans of the Nashville scene. This is unquestionably, the look, the feel and the delivery of the newest incarnation of country rock that will dominate the charts in the next decade to come, and luckily for us, it’s looking to be the most provocative and exciting addition to the American songbook yet.

There’s no denying that C.K. & The Rising Tide sound like more of a live band than they do a studio act, but nevertheless, that didn’t stop them from banging out a real, genuine treasure in their new song “Friends.” Flach is a really gifted poet, and it’s on the strength of his prose that this group seems to really spread its wings and fill up all of the empty spaces that sometimes plague country bands that try to make such pastoral, folk-influenced music. Structurally, “Friends” is a pretty straight up country song, but there are so many layers of sonic disruption and discord that add to the textures of this track that it’s hard for me not to shelve it in the alternative section. There are moments that, dare I say, the group even touches on experimental territory, and to say that they’re anything less than the brilliant innovators that they are would be flat out criminal.

A song like this really encourages me to feel safe in saying that we can believe in music again. For a while there, it seemed like the big box corporate interests of the MTV generation had completely eclipsed any sort of organic DIY ethics that were still existent in our modern times, and that was a pretty heartbreaking concept to try and grapple with, at least for those of us who had come to depend on commercial free music to get through our lives and thin out the monotony that FM radio can sometimes cram down our throats in the most uncompromisingly droning of fashions. But we’re seeing a change this year, and C.K. & the Rising Tide are one of the finer examples of the revolution in audio that we appear to be riding into. I’m not a huge country music fan, but if this band lights enough of a fire underneath Nashville to inspire other bands to go out on a limb and try something different like these guys did, my patronage of country music could change very, very drastically in the near future. Art makes you think, and great art makes you think a little differently.