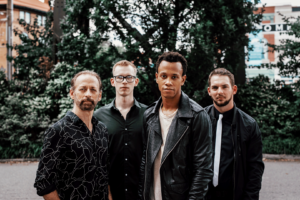 Fueled by the sheer power of human connection, The J.O.B. began in between Jim O’Ferrell’s deployments from the war in Iraq while searching for a lead guitarist to play his music. The lineup came to be with Jason Crawford on guitar, Eric Bandy on drums, and bassist Jared Merrill filling out the final vocal layer. The love of music and performing is the catalyst that connected four people from four entirely different walks of life to create something honest and passionate. The J.O.B. are storytellers, taking authentic human experiences and reflecting them like a mirror onto their audience. Giving a voice to those that may have buried their own somewhere deep inside, their music is a true companion that makes people’s emotions relevant and meaningful. Every face in the crowd is an individual opportunity to form a bond. Performing live is where the rubber meets the road, and The J.O.B. travel at full speed while also taking time to appreciate every stop along the way.

About Jim O'Ferrell 2 Articles
Songwriter, guitarist & singer, city gardener, herbivore, critical thinker. Former US Army Airborne Ranger, combat infantryman, fitness guy. Grandfather.
Website Facebook Twitter
IMAAI.org is a registered non-profit with the purpose of being a resource center and knowledge bank for Independent Musicians, authors, poets, performing artists, visual artists, etc. Originally founded as Indie Artists Alliance in 2005, we converted our organization to a non-profit late in 2017, eliminating membership fees to the website. Joining the site is free. During 2019, we will be adding a lot of additional features and functions to make this an even more valuable site.