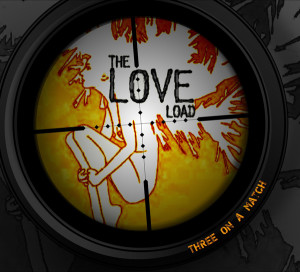 This is the latest release from The Love Load a 3 –piece Alt-Rock band from DC entitled Three on a Match (2012). Reading from their bio: Washington D.C. power trio, The Love Load, has released a four song e.p. entitled “Three On A Match” following their internationally acclaimed debut, “The Human Resourceful”. This second release sees the group both coalescing as a true band with Ted Watts handing over all the guitar reins to Blaine Misner ( who also produced, mixed, and recorded the record aided by assistant engineer William H. Waikart III) and regressing into punk aggression served up on a soon to be release 33rpm 7inch complete with a digital download card.

“Three on a Match” 4 song EP is their latest release and the result though far from a self-indulgent ego trip, rather a moving and elegiac artistic statement from start to finish. This is not your overly predictable Ramon Noodle “Sing-Songy” Rock band. Instead this band could even be classed as a 3 genera band: Alternative Rock, Hard Rock and slight Punk. The Love Load have way too much precision and clarity to live in the shadows of overly-predictable Indie Rock. Indeed this is clearly evident in songs like “Words” and “White Man’s Burden” which methodically ups the ante to a very respectable level of catchy musical craftsmanship and addictive hard rocking riff-manship that transcends pigeonholing. What’s more: the music is also commercially viable with a fresh sound and a jagged edge that holds the attentions span of the listener perfectly. In a nutshell this is Green Day meets The Killers meets The White Stripes. This 4 song line-up appeals to many listeners with a wide variety of musical styles – but above all is a powerful voice for all the rockers out there who want something more than the status quo.

The Songs that stuck with me the most were: Words and White Man’s Burden.

Check out the EP – theloveload.bandcamp.com/

I would imagine in time we will hear more from this amazing band in the near future. No doubt The Love Load has carved a marketable niche for themselves thus far setting them up for marketable success down the road. But for now I can honestly say this is one artist that clearly gives you a musical snapshot that is highly original, unique and dare I say dangerous and melodic in scope.