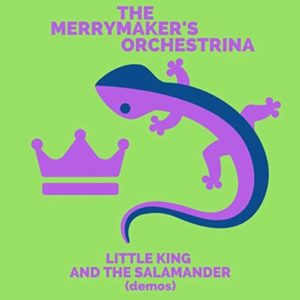 The Merrymaker’s Orchestrina have everyone in the American indie underground abuzz at the moment with their new album Little King and the Salamander (demos), and it’s not without good cause. This power trio pulls out the big guns for this LP, hammering out folkie balladry in the form of “She’ll Do Anything,” “I’ll Be (Kisses at Your Door),” “Thinking of You” and the wondrous “Fade into the Night,” alongside visceral rock songs like “Together,” “Particle Craze” and “Hey Everybody,” and the rippling rhythms don’t slow down even in the most emotional of moments that the record has to offer. It’s a bold statement from a bold band, and it’s my pick for best demo collection out right now in the States or abroad.

“White Light and Lullabies” and “Together” are two of the smoothest songs that the group has issued on a singular disc so far, but they don’t overshadow the rougher jams like “Jeepers Creepers” and the fun “Definitely Not My Underwear” in the least. It’s hard for me to believe that all of these songs are actually demos, not because of the vitality that they dispense so wickedly around every turn in the tracklist, but because of how polished the organic tone of the play is regardless of the experimental nature of the music we’re hearing. The Merrymaker’s Orchestrina don’t waste our time trying to expand on a lot of jaded concepts and inarticulate notions rooted in past breakthroughs made by their influences; they’re forging ahead in this album and leaving no stone unturned in their quest to keep us entranced from start to finish.

There’s a lot of color in the lyrics that frame the rollicking rhythms in “I Have Always Been Here,” “Slip Away (Dreamin’ Again)” and “Particle Craze,” and I’d even go as far as to say that they’re just as cerebral and mind-bending as the psychedelic melodies that each one of these songs spits out in droves. The late 2010’s have been an era rife with surrealism in everything from pop to hip-hop to jazz and country music, but few artists are utilizing it in the fashion that The Merrymaker’s Orchestrina do. They’re as original as they come, and while their tonality is melded with vintage textures, it has little in common with the analogue fodder of the 1970’s beyond its strikingly engaging construction.

If you’re looking for an album that will keep you on the edge of your seat this spring, Little King and the Salamander (demos) is definitely an LP that you really need to consider picking up. The underground is always producing good music despite whatever nonsense might be transpiring to the right of their experimental ethos, and in this present time, no one is making the moves that The Merrymaker’s Orchestrina are both in and out of their home studio. The rock n’ roll revolution continues to burn as strongly as it ever did in their latest effort, and from where I sit, it wouldn’t appear that their momentum is going to be slowing any time soon.