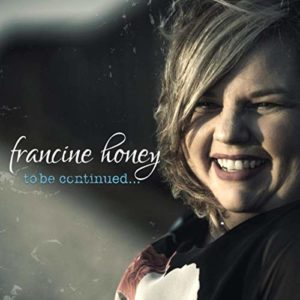 Country swing meets good old fashioned folk balladry in To Be Continued…, the all-new album from critically acclaimed singer/songwriter Francine Honey, and though it’s as smooth and accessible as anything currently dominating North American pop charts, it boats an endearing old world charm that is far from the plasticity of the mainstream. In songs like the rumbling “Open Road” and the slow dance soundtrack “I Wish,” listeners get to experience Honey at her most relaxed and confident in the studio environment to date, and while To Be Continued… lives true to its country ethos, there’s so much texture to the music that it would be wrong to describe it as anything other than a broadminded, diversely stylized force to be reckoned with. I had the chance to sample from the album recently and was quite impressed with what I found.

To Be Continued…’s leadoff single, “Shacked-up Sweetie,” is supported by a colorful music video that divides the spotlight between the instrumental prowess of the track and a delightfully theatrical narrative presented to us in the video itself. Not even the conservative church setting afforded to the wedding party featured in the video is able to escape embracing the sheer vibrancy that exists within the beat in the song, and we watch as everyone in sight becomes enamored with the sly rhythm framing Honey’s lyrics. I myself couldn’t resist the urge to shake to the electrified emotion in the percussive track, while Honey’s vocals undisputedly steal the show with their balanced timbre and slick bonding to the string melody in the background.

“Stay,” “To Be Continued,” “Shacked-up Sweetie” and “Open Road” all share a really engaging physicality that I think makes the difference in this otherwise subtle, folk-centric track listing. Though you’d be hard pressed to find more soothing ballads than that of “Snowflakes on My Eyelashes” and the quiet stomper “Can’t Break Through to You,” Francine Honey really gets in touch with her carnal, rock-influenced side in To Be Continued… more than she ever has in previous releases – and frankly, she wears it well. A smoky blues number like “Honey” suits her skillset wonderfully, and it feels a lot more mature and thoughtful than the majority of output we’ve heard from her closest contemporaries in recent years.

You really can’t go wrong with this record if you love bittersweet pastoral poetry flanked by searing, uncompromising melodies that use unconventional means of conveying a deeply emotional message. Francine Honey has certainly never disappointed us before, but in this LP there’s a sense of ease in her execution that indicates to me that she’s really gotten comfortable with her sound and bringing her music to life in the studio. Whether it be the haunting glow of “Marilyn” or the slowed down, bluegrass-tinged string play of “Space,” To Be Continued… is an album that country fans both north and south of the Canadian border are going to want to take note of this winter. If it’s representative of what we can expect to hear out of Honey in the future, it might just be the beginning of a whole new era in Canadian country music.