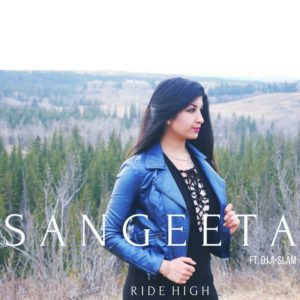 The British born South Asian originally from London, UK moved to Canada as a young teen and says music has been the one constant in her life.

She teamed up with Producer, DJ A-Slam and together they formed the song, “Ride High”; a catchy, fun EDM track with an exotic ‘East meets West’ flair.

“Growing up after the overwhelming move from England to Canada was tough, but music helped me get through the hard times. It grew my confidence and soon, music became my oxygen. Soon after hearing the beat for “Ride High”, the ideas just flowed and that one evening, the full lyrics were written along with the vocal melody. The next day, I was laying down the vocals in the studio. It is probably my favourite song I have worked on so far.”

She has written other songs, “Catch Me”, “Sweet Time” and “Stand United”; a song about homelessness and poverty, just to name a few. However, she knew in her heart, “Ride High” was the perfect track to make her mark with. “It’s the kind of song that will get stuck in your head and I hope, get you dancing.”

Now the talented Artist is set to release her EP, “Escape” shortly and will be working on the official music video for the track soon. So far, the tune has been getting great response and her fan base has been eagerly awaiting more music from her.

To find out more, visit her Official Website: www.sangeeta.ca

This is the home of sangeeta.ca