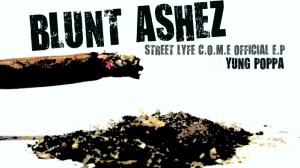 Yung Poppa To Release Blunt Ashez
Street Lyfe C.O.M.E,
did confirm that after two unexpected delays with the release of Yung Poppa`s long anticipated EP “Blunt Ashez” he`s finally ready to release the EP,(that many close to the los angeles Rapper describes as similar to Dr.Dre`s release of “DETOX”)to the public.

But questions still surface about there being too much hype built around Blunt Ashez.But when Yung Poppa and many close to the Street lyfe camp were asked about it they said theres no hype,people just know Yung poppa is a hott hip hop artist.so with a mixture of that and just the simple fact that people like to hear good music and know thats exactly what they get with Yung Poppa is saying enough without the hype.

The release of Blunt Ashez will be Yung Poppa`s fifth release,with the first being I Luv Mary in 2009,Addicted 2 Music vol 1&2 in 2010-11 and Call It A Nite in 2011 and Cheef N Oz`s in 2012,So 1 things for sure Yung Poppa no stranger to releasing music and when we asked him what`s different about Blunt Ashez and all of his other releases?He replied that on Blunt Ashez i got to be myself.

Yung Poppa has done well with his music releases but has also performed at most of hollywood hotspots like The KeyClub,and The DragonFly just to name a couple,and has opened shows for artist such as Mann and Kendrick Lamar.Yung Poppa has done well exposing himself to the hip hop community,but remains humble and says he`s just an indie artist sharing my music.
To find out more about Yung Poppa and to hear his music visit him at
www.streetlyfecome.com
and be sure to look out for the release of the long anticipated EP “Blunt Ashez” Coming May